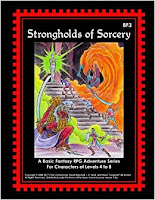 (Full disclosure: I have a credit for doing a little proofreading of this module.)

This module by Chris Gonnerman, Stuart Marshall, J.D. Neal, and Steve "Longman" McKenzie is a follow-up collection of adventures set in Gonnerman's own Glain campain. The first Glain collection, BF2 Fortress, Tomb, and Tower, was released a couple years ago. This new book is comprised of four meaty adventures loosely tied together by the theme of all taking place in wizard strongholds as well as some small, but direct connections within the adventures themselves. As it goes with any module review, if you're not a GM, you probably shouldn't read further.

The first adventure, "Castle D'Angelo," is a sequel to BF2's "Fortress of the Iron Duke" and it's even recommended for at least one of the characters to have gone through that adventure first. Although there are a few superficial similarities between this module and the old TSR module, X2 Castle Amber (Chateau d' Amberville) - namely being trapped in the castle of a famous and insane wizard family, the link to BF2 makes it a distinct work. Essentially, the demon Khaadk from BF2, still imprisoned in his cracked jewel, has been used as part of a plot to bring ruin on the Duke D'Angelo. The power of the jewel has trapped all inside and has driven them insane. Once the PCs enter the castle they can't leave until they safely contain the jewel, all the while trying not to kill the innocent, though insane, inhabitants. They must also not fall prey to Khaadk's periodic waves of insanity themselves.

This adventure is designed to degenerate into absurdity and madcap farce. Comedic roleplaying is actively encouraged, something which is all too rare in most RPGs nowadays. The whole thing comes off like a cross between a Fellini dreamscape and a series of Monty Python sketches. Aside from the central premise of the module, there are a number of encounters that are worth pilfering even if you don't plan on running the adventure straight. The Chattering Mask is a simple element that could be put into any adventure as a way of giving background information to the players if they ask the right questions. The encounter with the drunken high priest, Herman de Groot, contains fantastic, quick rules for drinking contests or even just mechanically codifying the effects of intoxication. Other encounters like Tia's Dollhouse and the Engine of Enchantment make for memorable small encounters. This is a long adventure, so it could be played over the course of half-a-dozen sessions. In the end, removing the curse could be beside the point if the players are having fun.

The second adventure, "The Tower of Light," on the other hand, has an explicit internal game clock. The PCs must stop the wizard, Rurik Evidur, from collecting the mysterious and dangerous substance, aqua lumina, before he absconds with it to sell on the black market. Even if they fail at stopping him in the radioactive tower of Liddan Nu Madar, it could provide a jumping off point for a series of adventures in pursuit of the wizard conman who's always one step ahead. It could also lead them into the Great Desert of Glain where they might later encounter a portal to the grey plane of Nazgor, or provide them with a solution for disposing of the magic sword possibly found in the next adventure, "The House of Coldarius."

"The House of Coldarius" is another adventure that has a deadline for the players. The PCs must rescue the young wizard, Rafaela, before the ancient vampire/wizard, Predmore Coldarius, sacrifices her to create a terrifying weapon (a vampiric longsword) using the strange substance, nocturnium. This adventure plays like a game of beat the clock in a fun house of Universal movie monsters. There's a vampire, a lycanthrope, a flesh golem, and a mummy. Again, this is another adventure where "failure" may yield just as interesting of results as "winning." It also offers a gateway into another world, Moonmist Moor, a Bronze Age realm with its monolithic Spires warding off the spectres haunting the sky above.

Finally, "Thaumerion's Tower" plays like a tomb raid for a wizard who isn't dead yet. Thaumerion is a wizard and a scholar who has discovered the secret of immortality through imbuing himself with the regenerative powers of trolls. Incidentally he also invented the crazy deadly creatures which are troll mummies. Along the way, you come into contact with a harem of wights, a succubus, and a handful of fairly nice magic items. Even if the PCs defeat Thaumerion and dispose of his abominations, they still might want to get rid of all his written treatises on trolls lest someone else figure out his secrets. There's one in "Castle D'Angelo." They could start there.

This is a great collection which could be used for pretty much any old school RPG, free from the Basic Fantasy website (here) or available from Amazon or Lulu for very cheap (here and here).