Holmes and the Human Fighting Man 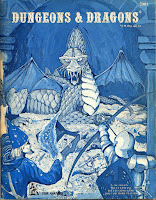 I've been revisiting my copies of Holmes Basic Dungeons & Dragons and Blueholme - both the Prentice and the Journeymanne Rules. This is a version of D&D I only gained awareness of 20 years ago when I bought TSR's Silver Anniversary box set. It's a version I can examine with fresh eyes, unaffected by the fog of nostalgia. Sure, it's familiar in that there's a bunch of Sutherland and Tramp art throughout and the core concepts are the same. And yet, in terms of tone, it's pretty singular.

Caught between OD&D and AD&D, and edited by neurologist, J. Eric Holmes, this rule set is a streamlined reinterpretation of the original rules designed to bring new players into Dungeons & Dragons who didn't have a background in war gaming. To that end, it was incredibly successful, and it provided a nice segue into the advanced game which would come out over the next couple of years.

There are small differences between this compact rulebook and both the original and advanced rules, but again, it's the tone that separates it from the other books. It feels open and mercurial and magical compared to the abstract war gaming instructions of the original rules, and nowhere near as precise as AD&D with its explanations of bell curves and rules for grappling and psionics. In the section titled, "Dungeon Mastering as a Fine Art," Holmes explains how to run the game with simple pragmatic advice to make the game challenging, but survivable. He directs DMs to narrate dramatically, use colorful dialogue, and have characters invoke gods like Zeus, Crom, and Cthulhu when they swear. The spell lists, monsters, and magic items don't feel Basic. They have a Byzantine, Old World faerie-land feel to them. They evoke all kinds of mysterious possibilities. Blueholme's retro-clone version of the rules extends this feel with its whimsical fairy-tale art and tone.

I recently read an old Dragonsfoot post by Geoffrey McKinney about using the Holmes edition as a complete game. There's something compelling to the argument. There are better places to read about Holmes' rules (like here), so rather than go on and on over well-covered territory, I wanted to touch on one particular topic that's I found interesting: Holmes' human Fighting Man.

The Fighting Man is in some ways the base class of any edition. You can tell a lot about the system by how it treats its fighters. Looking at Holmes' Human Fighting Man, it strikes me as curious how unimpressive this class is when compared to the others. The only benefit the Fighting Man has is having the largest hit dice of any class. Although, Rules as Written, you could still roll a 2 on the d8 while your Magic-user rolls a 4 on their d4, though the law of averages who suggest the opposite most of the time.

So what do other classes have that the Fighting Man doesn't? I mean, outside of the fact that they don't cast spells, turn undead, or have special skills.

While it is true that Holmes' human Fighting Man can wear any armor, the same can be said for dwarven and halfling Fighting Men, as well as the  Cleric and elves, which can both cast spells as well. It's not a special benefit. The Fighting Man can also use any weapon. This limitation is rendered mechanically meaningless though by the fact that Holmes didn't incorporate Greyhawk's variable weapon damage, so everything does d6 damage (except burning oil, which uses the d8). This means that a Magic-user could do as much damage with their dagger as the Fighting Man deals with their two-handed blade. There is no mechanical limitation to a character's weapon restriction, meaning the Human Fighting Man doesn't get bragging rights for being able to swing everything. Holmes even loses the OD&D Fighting Man's multiple attacks per level against opponents of less than one hit die (Goblins, Kobolds, etc.).

In terms of Saving Throws, the Human Fighting Man is equal to the Thief, a little better than Magic-users on the whole, but not as good as Clerics. Both dwarven and halfling Fighting Men, however, have better Saving Throws than the human version of the class. It's also worth noting that all the demi-human Fighting Men have abilities (infravision, search chances, +1 to hit with missiles, etc.) that their human counterparts don't.

So, after all this, why would you choose to play a Human Fighting Man in Holmes? While I'm not a power gamer, and I dislike discussions of character optimization, the Holmes game world seems stacked against your standard fighters. And yet, in some ways this makes them more heroic.

There is something inherently noble in a character without any special talents or abilities who decides against a life of common serfdom or as a village guard to choose to adventure into the unknown for gold and glory. It may take them longer to advance and progress, but that advancement means more because it was harder fought and wasn't aided by spells, sly tricks, or extrahuman abilities. Any abilities the Holmes Fighting Man has must be based on in game play where trial and error connects with an understanding between the player and their referee.

This is who the Holmes Fighting Man is. Their heroism is one that is earned and based on their deeds, not on a gift package given to them by their god (I need to write a whole post on why Clerics in D&D are OP). It also makes them more challenging to play, encouraging the player to find ways to make their Fighting Man matter to the group outside of combat. This makes the Holmes fighter stand apart from the modern incarnation of the uber-warrior tank. That doesn't exist in Holmes. The Fighting Man's relative weakness is perhaps what provides the Holmes rule set the space to be as magical as it is.

[All this said, I still prefer a little more in the way of game fighter game balance and advocate for something a little closer to the Fighter in BFRPG and S&W, or B/X and OD&D if you prefer.]
at July 04, 2018 No comments: