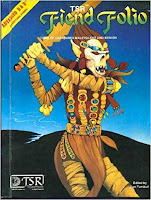 Shane Ward of 3 Toadstools Publishing posted a cool idea on MeWe and his blog about taking your favorite bestiary off the shelf, choosing 10 monsters, and designing a setting around it. I’m someone who generally feels most fantasy RPGs are overstuffed and under-curated. The idea that a fantastic realm would support the vast array of humanoids used in many campaigns (goblins, hobgoblins, kobolds, orcs, gnolls, bugbears, lizard men, etc.) in addition to the nations of mankind has always stretched my credulity.

I started by selecting monsters according to various types: a semi-intelligent humanoid, an undead, an ancient fey race, a creature from classical myth, a giant/ogre/troll-type, something aerial, something to jump out of the water, something extraplanar, and some crawling thing underground. It seemed like a sensible way to begin as well as making sure you covered a broad scope of creatures.

What I found was that my self-imposed taxonomy was fairly constrictive when applied to my favorite monster books. Some bestiaries lean more towards some categories than others. This classification also doesn’t necessarily address settings of uniform environmental terrain or weather. Thematically, a selection of monsters for a desert setting or an arctic setting might make more sense than some Noah’s Ark collection.

Anyway, here’s my list. I chose the First Edition Field Folio as my book. It was the first AD&D book I ever got (from Sears!) and the vibe of its artwork and oddness has had its stamp on my gaming ever since. People either love or hate this book. It has a reputation for being filled with silly frivolities no one would use in a game (like Flail Snails and Flumphs). And yet, FF contains some of the most iconic creatures/races in D&D culture: Aarakocra, Tabaxi, and Kenku – all now PC races, I believe; various monsters from the classic G-D-Q modules (Drow, Kuo-Toa, Svirfneblin, Lolth); the Lovecraftian Grell; and the classic extraplanar races of the Githyanki and Githzerai.

I couldn’t quite get the list down to 10. I cheated a bit by picking two for one category (the underground critters are little), and a broad grouping of monsters for two others. I left a bunch of good ones behind, including some of the more iconic ones to help it feel more original. Still, it was hard not to include the Giant Troll and the Mountain Giant, both of which I think I like better than their more standard counterparts. I’ve put the categorical list below, but first, let’s look at the setting, a Dark Ages analogue of the lands around the Black and Caspian Seas in the West, stretching to Tibet and Myanmar in the East.

Welcome to Casperovia (meh), a land of isolated city-states and falling kingdoms, separated by mountain passes and deep forests. The common folk are superstitious and hesitant to travel at night. You can hear the Doombats shrieking from their mountain cave eeries at the witching hour, ridden by evil men called Doomriders. Necromancers send out their subhuman Grimlocks from their cavernous pits to raid small villages and bring back innocent victims to defile in terrible rites.

Those few who wander into the underworld may find death in lowly forms of life crawling beneath the ground, like the Volt and the Osquip. Deeper still are the Deep Gnomes, those small fey creatures who left the world of light long ago when mankind awoke, and now dig deep into the dark places singing to the rock of the secrets of old. Lower still lie ancient cities buried in a cataclysmic event, forgotten necropolises filled with Coffer Corpses haunting dead streets having died before their spirits could be put to rest. Now these guard the technological wonders of a bygone age.

The surface world has its own terrors like the lonely Ettercap with his spider hoards hunting the woods spinning web palaces of sticky, dark death. The seas of Casperovia are a dangerous place for the men who sail them, as siren Kelpies lure them into their botanical embrace in the guise of beautiful water nymphs. In the cities, women and children dare not walk the streets at night for fear a Penanggalan will swoop down on them and feast on their flesh. Pregnant women are a particular favorite of the creature, with tales of traitorous midwives revealing their nature filling new mothers with dread.

A new evil, the Slaadi, has entered the land through a doorway deep in the earth, hidden somewhere within the Fire Swamp. Like the Penanggalan, they can change their demonic toad shape and walk among humans as one of their own, with the threat to capture and enslave them. However, all is not lost. Some say the dragons from the East have returned after a long slumber. Perhaps these wyrms of old may put their past enmities with humans aside to banish the extraterrestrial frogs.