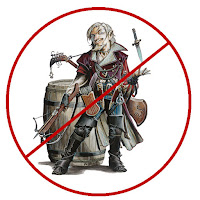 I expect this post to be poorly received (if it's received by anyone at all). Regardless of what I say in this post, I think everyone should play the game that they have fun with and not feel bad about it. That said, I hate Bards.

At least I hate them as a PC class. As a non-magical, jack-of-all-trades NPC? Fine. But for me and my game, the spellcasting, multiple-attacking, healer and rogue known as the Bard has no appeal. It is as ridiculous to me as it would be if there were a player class for sports team mascots in a fantasy milieu. I find them obnoxious and silly. They tend to appeal to players who were high school drama club kids, open-mic comedians, hack local musicians, and power gamers.

The Bard class has a troubled history in the game. In 1e AD&D, Bards were relegated to the back of the PHB as an optional class at the DM's discretion. There was even a caveat that most DMs didn't allow them. I think that, in itself, says it all. It's like Gary knew that he was introducing something silly and shameful so he hid it at the back. He also made it very difficult to become a Bard. The Bard needed scores of at least 15 in Strength, Wisdom, Dexterity, and Charisma, and minimum scores of 12 in Intelligence and 10 in Constitution. Almost no character is so blessed. They also started as a Fighter from 1st to 5th level, then continued as a Thief starting sometime prior to 8th level, before pursuing Druidic studies sometime before 9th. Only then would they become a 1st-level Bard. With all those hoops to jump through it's as if Gary was saying, just don't do it.

Oh, how times have changed. Bards are currently regarded as one of the more powerful (and therefore "best") classes in modern D&D. Discussions about how to min/max your bard to be the ultimate badass, cool guy abound in forums. The class is also seen as the consummate party member by using lots of buff and de-buff abilities to enhance the play of their fellow PCs. As I alluded to at the top of this post, I realize I'm in the minority here. Most people like the flexibility and customizable application of skills, feats, and abilities on offer. I just can't relate. Not just to this class, but to the tone and setting of any game that uses this class. The image of some doink in a leather jerkin and a feather in their cap bringing a lute down into the dark places of the earth to jam out some riffs to aid the party in felling a red dragon completely turns the game into a joke for me.

I recently came across a Web DM video on Bards (see below). I like these guys and I think they have a lot to offer current gamers, but when I listen to them say that 5e finally got Bards right, reeling off dipping options, level paths, and maxing out combinations of abilities I can't help but laugh. Not just because of how ridiculous it all sounds, but because I realize this is how most people play the game. In modern D&D every class is a jack-of-all-trades, master of all. Everyone can fight, cast spells, heal, pick pockets, etc. It's a game where every day is your birthday with a constant stream of presents and every kind of cake and honestly it bores me to tears. But hey, do what makes you happy. I'm not here to tell you (and nearly 90% of all other role-players) that your fun is wrong. Just get off my lawn. 😀

So, could I ever envision allowing a Bard PC in my Basic Fantasy game? Maybe, but I don't think I would even use the Bard as given in the BF Quasi-Classes supplement. It's still a little too silly. I think I'd be okay allowing a base-class Fighter or a Thief to become a character with Decipher, Listen, Lore, Tumble, Influence, and extra languages. Starting at second level I'd give them one orison every other level until 10th. I'd also keep all of BF's prerequisites, which although tough, aren't as high of a bar as Gary set. They could carry an instrument if they wished, but it would mostly be for flavor, or to use as a known secondary skill if an adventure required it (i.e. Death Frost Doom). That seems like reasonable Bard class to me although I'm willing to bet no one would want to play it.

One last thought here, and it doesn't strictly pertain to my thoughts about Bards. From time to time in this blog I might rant about newfangled RPGs and why I like something else more. People get very sensitive when they feel you are telling them that they're doing it wrong - no matter what "it" is, but particular when "it" is role-playing. Well, I just want to say, stop sweating it. There's plenty of real things to feel anxiety about. Your hobby shouldn't be one of them. If people say they don't like the game you play or how you play it, that's fine. Let it go. If someone reads this and calls me a crusty old Grognard who plays an inferior, overly simplistic version of the game, so be it. I don't care. And I don't care if the version of the game that I like dies out because no one else wants to play it. If that's the way it is, that's how it goes. Tough cookies for me. Likewise, if I say something you like is silly, learn to brush it off. For those of you who like to play Bards, the more power to you.