Dungeon Digressions: Rooms Apart and Other Ways Out 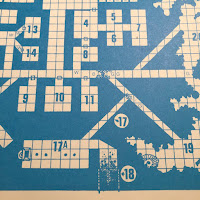 (Warning: some SPOILERS follow for G1, Stonehell, and the House of Coldarius adventures)

I’ve been formulating an idea of a particular type of dungeon room with which I’ve recently become enamored. For lack of a better term I’ll call them dungeon digressions. These rooms are not only set apart from the general theme of everything else going on around them, but more importantly hint at a larger “otherness” beyond the understood edges of the adventure, or even campaign.

I’ll give you an example which crystalized this concept for me when I recently re-read G1 Steading of the Hill Giant Chief. The room is 17A of the dungeon level, the Weird Abandoned Temple. The orcs on this level (presumably those rebelling against their giant masters) have blocked the door to this temple with rocks, and it is bolted shut. Whether it’s an attempt to keep people out or keep something else in is precisely what makes it so inviting for curious adventurers. Inside the temple the stonework glows purplish-green. The walls chill to the touch and the columns induce nausea. Carved signs and shapes seem to stare at intruders and shift position when not watched. A greasy, yellow-gray altar sits at the far end and beyond it a concave alcove. Staring into the alcove causes visions of sickly mauve and violet tendrils to writhe and stretch towards the viewer, causing insanity 50% of the time. If the viewer doesn’t go insane, they are gifted a scarab of insanity or a 5,000 g.p. gem.

This is a great eerie room heavy on the eldritch vibe, but it’s the room’s context within the rest of the adventure that makes it stand out. This room shows up in the middle of a 9th-level recon/hack-and-slash stronghold invasion with enslaved orcs revolting against giants working for the Drow. There’s a lot going on in this module already, with breadcrumbs, subplots, and portals to the next chain of adventurers in the G-D-Q series. So why did Gary stick 17A (and 18, the blocked-off Vestry sloping downward) into this adventure? Was it a hint or a connection to a cult of evil chaos, or elemental evil? Or does the vision of the alcove with its Lovecraftian feel hint at a Tharizdun connection?

Whatever the intention, the impact is great. No matter how massive and intricate Lolth’s grand designs are in this campaign, this one little room gives a hint of a massive, incomprehensible reality which dwarfs the demonweb queen’s machinations making them seem petty and small by comparison. It’s a small portal, a tiny digression, which drops off a deep end into a larger, abyssal perspective. I love it.

Michael Curtis’ Cenotaph room in the canyon of Stonehell is a very brief version of this with the room’s bas relief intimating the knowledge of a vast sleeping entity lying in wait in a distant land. With that kind of realization, what does it matter if you are downed by a pack of filthy kobolds in some forgotten corner of an underground prison complex. The scale of the PCs’ mortal lives have no meaning by comparison. It does a lot without really doing very much of anything, preparing the PCs for the discovery of the nixthisis at the heart of the underground hell.

The main interest for me with these side-rooms isn’t that they bring a whiff of R’lyeh to the game. The eldritch quality of both is merely coincidental. What’s great about them is they offer a door to worlds older than the mountains in their current dimension. In short, they can be a hook or way out of the current adventure into something deeper and weirder. If they want it, that is. In the case of G1’s 17A, the PCs can decide that what lay beyond the bronze-banded door was interesting enough to abandon Geoff, clear out the rumble in the Vestry, and find their way down to the veins of the earth, so to speak.

One more example I recently came across is in the Basic Fantasy adventure, “House of Coldarius,” from BF3 Strongholds of Sorcery. The adventure largely concerns a vampire kidnapping a wizard pupil to create a dark, intelligent sword. It’s a fun, beat-the-clock rescue in a scary house with various Universal movie monster stand-ins (there’s a vampire, a flesh golem, a mummy, a lycanthrope, etc.). However, in the locked parlor of room 39 on level 7, there’s a black metal arch with silver runes that serves as a gateway to the world of the Moonmist Moor, a Bronze Age realm haunted by spectres who feed off the few humans at night and are kept at bay by huge monoliths called Spires. It’s only a thumbnail sketch of a world, but the strange open possibilities of it, the offer to the party to go “elsewhere” is everything that fantasy should be about.

These kinds of side-door encounters aren’t exclusive to D&D. They can be found all over the fantasy genre. “Riddles in the Dark,” from The Hobbit, is maybe the most famous example. Bilbo gets separated from his party, meets a weird creature, finds a magic ring, and the fate of all Middle Earth changes. Without that digression and resulting alternate way out (literally), you don’t get The Lord of the Rings.

A lot of times the campaigns we create are built around a central, preconceived narrative idea that everything rests on. But these little “dungeon digressions” are important to have in the game as release valves or rifts to other worlds or adventures to keep things unexpected and fresh. What might start as a typical dungeon delve turns into doorway to Barsoom. The heist of a rare piece of art becomes a portal to the Blue Medusa’s maze. A mirror becomes a way into Voivodja. An escape from the city watch through a garden gate leads to a trek into Ynn. A passage through Ultan’s door takes you to the dream world of Zyan, with its masks and puppet masters. Basically, don’t be afraid to Terry-Gilliam your D&D game.